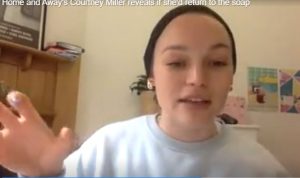 Courtney Miller of Home and Away discusses her future on the serial opera.

Since Courtney Miller, who played Bella on Home and Away, left the serial opera earlier this year, fans have been clamouring for her to come back.

Courtney Miller: I would, for sure. Would be. I wouldn’t serve a lengthy term, I mean. However, I feel like I just want to see everyone, especially now that I’ve finished a portion of drama school. I want to work again to see what I’ve learned, what I’ve taken in, and how my acting has improved. And that’s the ideal programme to do it on because you’re always working with new individuals, scene after scene. And there, I would feel so secure.

Like, this spot is familiar enough for me to just stroll on set and go. They are aware of how I operate. Therefore, there is no pressure from them; only my own increased pressure. As a result, I would, yes. Would be.

I constantly speak with both Lucas and the others, yet they still sort of appear on the show. It’s amusing how your lives may alter out of the blue. They are employed, although I am a student in a new place. You genuinely adore them, but communication with them isn’t always possible.

I believe we are experiencing one of those situations when something is there, say an Instagram chat, but few people actually utilise it. When something is very funny or is like a joke that we all grasp, we get in touch with one another. Having said that, I remain in touch with everyone of them. To attend Sophie Dylan’s birthday, I travelled to Sydney. So, yes, we’ll never lose touch, but it’s tragic that our lives inevitably must diverge in various directions. But that’s okay because Lucas will always be there.

I’ve probably been abducted four times. Yeah. But the first day on set at Bella’s house was completely out of control. On the first day of the shoot, my brother kidnapped me. I was so new to the location at the time, so that was probably the most stressful. I can still feel them. And Tim, who portrayed Colby, even said, “Come sit with me,” over lunch. I was simply experiencing flashbacks to my high school years as I considered who to sit with and what to do.

I had to be kicked after being flung upon his shoulder. I was so inexperienced that I had no idea that you shouldn’t actually kick with all of your strength. Because I was, you know, acting my little heart out and then was shoved in a car, I almost really hurt them.

‘Home and Away’ spoilers: Mia Anderson gets a SURPRISE visitor!