Home and Away: Heather holds Marilyn and her closest friends hostage – but will the police get there in time to save them?

Since arriving in Summer Bay, Heather has been working on a cunning scheme to get revenge on Marilyn, her hidden birth mother.
However, now that Heather has also kidnapped Alf, Roo, Irene, and Leah, it is not just Marilyn whose life is in peril. Will they all survive being isolated and alone?
This week on Home and Away, Heather (Sofia Nolan) returning to the Bay makes Marilyn (Emily Symons) happy.
She admits to breaking into Leah’s (Ada Nicodemou) home and wants to apologise by inviting Marilyn’s friends to a beautiful brunch. Desperate to make apologies, she comes clean about the incident. Marilyn is ecstatic because she wants to build a relationship with her daughter. 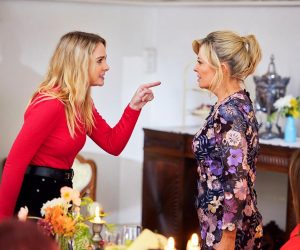 Emily Symons tells TV WEEK that Marilyn is overjoyed that Heather wants to make things right because she was terrified when Heather went without saying goodbye. She desires to restore the harm she has caused and forge a mother-daughter relationship.
Digital invitations are sent to Leah, Alf, Roo, Irene, and Lynne while Heather transports Marilyn to a historic sandstone mansion in the countryside.
Georgie Parker acknowledges that when Roo gets the invitation, “she’s a little perplexed.” She nevertheless attends since Maz will be there and because she cares about her friend.
Leah calls Marilyn for clarification since she is also perplexed. But when Marilyn’s phone rings, Heather brusquely grabs it from her grasp. 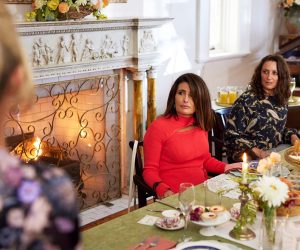 Marilyn realises at that point that Heather has never wanted to start a relationship. She seeks retribution. Before Marilyn can react, Heather strikes her in the head, rendering her unconscious.
She finds herself bound to a chair in a secret area when she awakens. She is terrified and perplexed as she realises the truth and begins to wonder how this terrible situation will turn out.
Marilyn observes her friends’ arrival on a screen in front of her as Heather enthusiastically greets them with a glass of champagne that has been covertly spiked with sleeping drugs.
In addition to the location being extravagant and odd when they arrive, Maz is also nowhere to be seen, Georgie relates. “Heather is also behaving oddly. Everyone is therefore puzzled and worried. 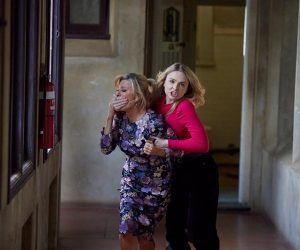 The drinks with added caffeine quickly start to catch on. When the group awakens, they discover that they are tethered to their chairs and unable to get out.
But as the drug aggravates Alf’s heart problem and his breathing becomes shallow and fast, the panic really sets in.
“Roo panics but attempts to maintain composure when she notices Alf’s breathing getting laboured. Georgie adds that because of his heart problems, he is in grave risk.
The group begs Heather to let Alf go, but a hysterical Heather drags a horrified and tearful Marilyn into the dining room and demands that she reveal her profound, dark secret: Heather is her daughter.
Alf, Irene, and Roo are stunned, but a spiteful Heather will not be deterred by their outrage.

She wants Marilyn to pay for leaving her so many years ago by suffering. As she sees Alf’s condition deteriorate, she realises that his passing would be the best way to permanently alienate Marilyn’s friends.
A cunning Roo discovers Heather’s scheme and attempts to help her by being sympathetic, but it’s useless.
As the captives begin to lose hope, Justin worries that something is wrong because he can’t reach Leah in Summer Bay. But the tipping point comes when he observes that Leah, Irene, and Marilyn are absent from the Diner.
He confesses to Rose and Cash that Heather is Marilyn’s child at the police station. Using fresh information, they look up Heather’s address and discover her mother’s body hidden in a freezer.
Rose, Cash, and Justin are terrified now that there is damning evidence against her.

10 upcoming huge Home and Away spoilers for next week that...