According to Turland in an interview with Inside Soap, “It’s going well and everyone’s pleasant – there are a lot of the same staff from Neighbours working on it.”

The serial star claims that his new persona is not too distant from the part he played on Neighbours.

“Although he’s had it rough and is often misunderstood, my character loves his family. Hendrix is not far distant from him!” 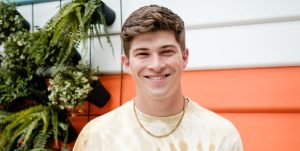 Fremantle Australia, the production firm behind Neighbours, is creating the new Channel 5 drama Riptide, which is set in Australia.

Jo Joyner, a former EastEnders cast member, and Peter O’Brien, a co-star on Turland’s Neighbours, will make their soap opera debuts on the episode.

O’Brien, who just returned to the Australian soap opera’s final weeks as Shane Ramsay, will play a major role in the drama.

Joyner will play Alison, a woman whose life is upended after her Australian husband goes missing after going surfing in the morning.

As this interesting story develops, it’s unclear whether he was swept away in a perilous riptide or whether there’s more to his disappearance than meets the eye.

Additionally, Turland spoke on his final performance as Hendrix Grayson, who unfortunately passed away on the serial opera after suffering pulmonary fibrosis.

The actor expressed his satisfaction with his emotional departure from the soap opera by remarking, “It was really wonderful.”

“I’ve had a lot of letters from folks; one of my family members just received a pulmonary fibrosis diagnosis, and other family members have had friends die from the condition. They claimed that the account of someone with that condition was fairly true. That was enough to get me started.”