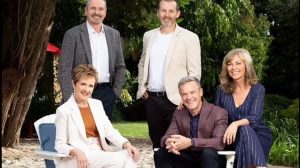 Fans of Neighbours will get one more opportunity to say goodbye to some of their favourite cast mates.

On Tuesday, the programme announced on their official Twitter account that Neighbours: The Farewell Show would be shown locally in Melbourne in April 2023. 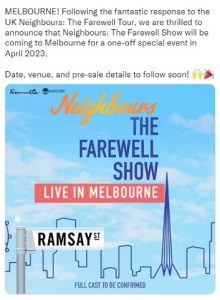 “Date, place, and pre-sale details to follow soon,” it continued.

The event’s actors have not yet been officially announced. Ryan Moloney, Jackie Woodburne, and Alan Fletcher were among the performers on the UK Tour.

It happens only a few weeks after the Australian soap opera’s finale, when the Erinsborough set was formally “dismantled.” 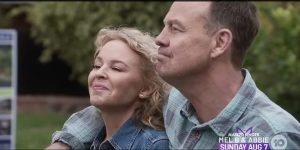 On July 28, the long-running series, which debuted in 1985, aired its final episode.

They were joined by Paul Keane, who portrayed Des Clarke famously, Daniel MacPherson, who played Joel Samuels, Mark Little, who played Joe Mangel, and others.

Both Jason Donovan, who portrayed Scott Robinson, and Kylie Minogue, who is best recognised for playing Charlene Robinson, returned in these roles.

The spectacular conclusion was centred on Neighbours legend Toadie (Ryan Moloney) getting married to Melanie (Lucinda Cowden) and living happily ever after.

Neighbours to air devastating death as Hendrix passes away