Johnny Ruffo, a star of Home and Away, recently provided his most sad cancer report to date.
The 34-year-old shared his terminal diagnosis of brain cancer with Carrie Bickmore of The Project during a Monday night interview.
Before getting a part on Home and Away, Johnny rose to stardom on The X Factor in 2011 and was given the news that he had a brain tumour in 2017.

Sadly, Johnny conveyed the heartbreaking news that his illness has returned in November of the year after he had declared himself cancer-free in 2019.
He has since updated his devoted fans on each stage of his battle with cancer.
It will eventually get me, but for now, I’m still kicking and battling,” Johnny assured Carrie, whose husband Greg Lange passed away from cancer in 2010.
“When I looked up the average life expectancy for my diagnosis and tumour, it was three years. It has been five years for me. “I’m ahead already. My current objective is to live a happy life and attempt to assist as many people as I can.
Johnny, whose latest book No Finish Line was just out today, expressed concern for Tahnee Sims, his longtime lover, who will be without him.
“You have no idea how challenging it has been for her. I detest to say it, but I often consider how difficult it may be for her if something were to happen to me,” the actor remarked.
“As a result, I’d rather not think about it. I just feel a little bit emotional about it because I know that something will happen eventually, whether it’s in a month, ten years, or twenty. 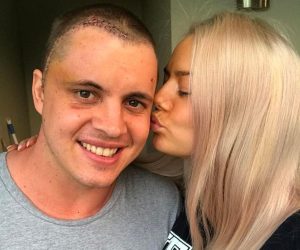 Johnny thanked Tahnee earlier this year for remaining at his side though the most trying times in his life.
Johnny said to Now To Love, “Without her, I might not be here.”
“When the headaches first started, she was the one who forced me to get in the car [to go to the hospital]. She also motivates me to take action. She encourages me to exercise by taking me swimming and running.

Home and Away spoilers: Xander and Rose are sticking around!