The soap opera’s Irene Roberts, played by Home and Away actress Lynne McGranger, has revealed her daughter’s engagement.

She posted a cute snapshot of her and her family on Instagram, including her longtime partner Paul McWaters, their daughter Clancy McWaters, and Clancy’s fiance Luke Dickson. 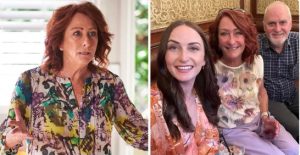 We are so pleased for our lovely daughter Clancy and her wonderful fiancé Luke to announce their engagement. She exclaimed, “We love you both very much,” in the caption.

While fitness teacher Clancy donned an orange-patterned dress with long sleeves, the celebrity, who is a fan favourite, looked lovely in a lilac jacket and matching lilac slacks.

Along with colleagues Home and Away actors Georgie Parker (Roo Stewart) and Sarah Roberts (Willow Harris), fans congratulated Lynne and her family on the exciting news.

Oh, that’s absolutely fantastic. Love to you both and best wishes!” Unknown wrote.

Congratulations, Lynne! That is such wonderful news to hear.

Congratulations, lovely photo of you all, said a third. 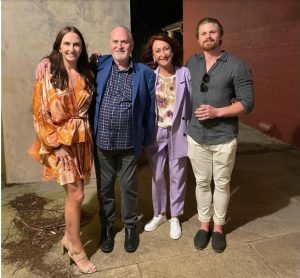 Clancy is probably going to be married before Lynne and Paul do. Despite the couple’s nearly 38-year relationship, Paul has yet to make a proposal.

Lynne jokingly stated that she is “still waiting” for Paul to pop the question during a 2014 interview with New Idea.

“In 1984, I invited him over to my house after dinner, but he never left. Still hasn’t,” she reportedly told the newspaper.

I’m here to inform you that we urgently require a new washing machine. “We often joke and say we’ll [get married] when we want some white goods.”

After joining the programme in 1993, Lynne holds the record for the longest-tenured female actor on an Australian soap opera.

She previously told Woman’s Day that Paul’s support was “wonderful” as she balanced parenthood and a job.

He took over as Clancy’s primary caregiver and house husband, she added. “He’s incredible. We still make each other laugh and enjoy each other’s presence.