Home and Away: Tane proposes to Felicity – but can she get past her commitment issues and say yes?

Seeing your lover get down on one knee is a fantasy come true for many ladies. But the situation is a little more tricky for Felicity.
When Tane (Ethan Browne) whisks Flick (Jacqui Purvis) away for a romantic night by the lighthouse, surrounded by family and friends, on this week’s episode of Home And Away, Tane pops the question.
Is her mind in the right condition to make a life-altering choice, though, after the short weeks she’s undergone dealing with her policeman brother Cash’s (Nicholas Cartwright) volatile state following the bloody shooting at the bikie headquarters? 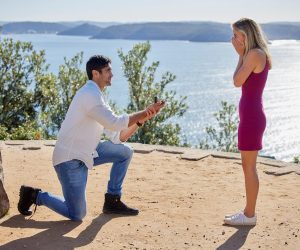 According to Jacqui, “Flick feels Tane is simply being extra-sweet because things have been super-tough with Cash recently.” And because of how preoccupied she is with it all, she doesn’t give it any thought.

A romantic melody written by Lyrik fills the air as the pair ascends the hill and pours themselves a glass of champagne.

Felicity realises Tane is ready to pop the question as she takes in the lovely picnic and the man she loves in front of her. 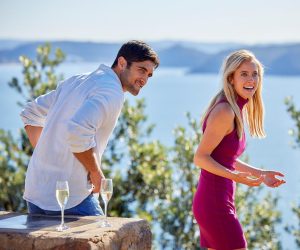 She doesn’t anticipate it at all, according to Jacqui. It comes as a huge shock.

But as Tane asks the question, “Will you marry me?” he kneels down. Felicity is taken aback and unsure on how to react.

One of Flick’s major phobias, according to Jacqui, is commitment.

She finds it unbearable to consider losing someone she cares about. As a result, Flick believes that committing means accepting loss.

Can she overcome her fear, take the risk, and come to the realisation that sometimes taking a chance even when there is a chance of losing something is worthwhile?

Is this a step too far for Tane and Felicity’s relationship after going through so much together, or is she now ready to face her greatest fear?

Home and Away star Sophie Dillman responds to engagement rumours