Lukas Radovich from Home and Away has switched from brunette to blonde hair.

A photo series of Radovich’s beach trip was posted on Instagram this week, showing the actor’s striking transformation months after he left the Australian soap opera as Ryder Jackson.

He wrote, “Unshaved and unswayed.”

His admirers expressed their admiration for his new appearance in the following comments: “With blonde hair, you look so different, “Wow! “Diggin’ the hair Lukas!” and “Rockin’ a new style, Lukas!””

But how long will he keep it?

When his Home and Away character left the show in June, Radovich responded by telling Digital Spy how difficult it was to film his farewell scenes.

“Due to my intense workload, I hadn’t really had time to consider how emotional these would be. There were, however, a few scenes involving Georgie Parker and Courtney Miller (who plays Bella).

“In a scenario that will be broadcast, Bella runs out as Ryder drives away, and we say our final goodbyes. We were running away from it, which prevented the director from getting the appropriate responses from us.

It became emotional when he sat us down and said, “This is the last time you’ll see each other,” using the example of Lukas and Courtney rather than Bella and Ryder. 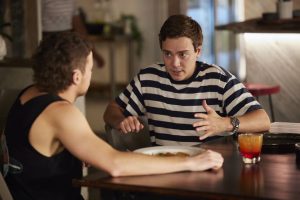