Next week on UK television, Tane Parata from Home and Away will be terrified when newcomer Tex Wheeler gives him a troubling ultimatum.

As a secret member of a biker gang with a vendetta against the Parata family, Tex has come to Summer Bay on a covert mission.

Ari, Tane’s older brother, once committed gang theft. The gang has decided that Tane should pay the loan as Ari has now passed away.

Tane is alarmed in the episodes airing on Channel 5 the following week after receiving a threatening note from the gang that portends problems for the Parata family. 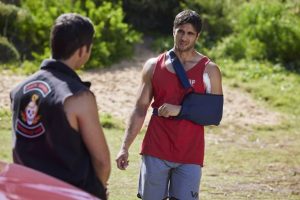 Tane is carried against his will in the back of a van with a sack over his head after agreeing to meet the group in a hidden place.

Tane learns Tex’s true identity and the reason he has been spending so much time at the gym lately once he arrives at the bikies’ headquarters.

Tane is coerced into a chair by the gang for a tense discussion. Tane plays dumb when it comes to Ari using the funds to purchase the gym, but gang boss Marty threatens to bring in Chloe Anderson if Tane keeps up his antics.

Tane is cautioned by Marty to pay back the $150,000 that Ari stole plus interest. Tane argues that he lacks the necessary funds, but the gang tells him to find a solution. 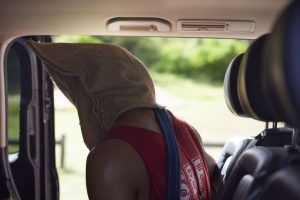 Tane is shortly after taken back to Summer Bay and ejected from the biker van.

When Tane explains the situation to his nephew Nikau, the two decide that the fastest way to generate money is to sell the gym.

When Tane phones Tex to discuss this potential solution, Tex responds that they have a better idea—the gang can use the gym to launder money.

Tane is afraid that he may not be able to quickly get the bikies out of his life.

Home and Away is about to air a storyline in latest...