Home and Away spoilers: Will Cash pick Rose after shock rejection from Jasmine?

Rose (Kirsty Marillier) of Home and Away has been dating newbie Tex (Lucas Lineham) in an effort to move on after having unpleasant feelings for her sister’s lover Cash (Nicholas Cartwright) in recent months.

Her scheme, however, has failed after she learned that Tex had been using a false name to belong to a bikie gang.

Additionally, Tex has been impersonating a laid-back, amiable handyman in order to learn more about the Paratas and pass that information along to Marty, a fellow biker (Ben Wood).

As the family member who can take ownership of the money Ari (Rob Kipa-Williams) stole in the armed robbery that left him in jail years ago and that the bikies are now demanding back, Tane (Ethan Browne) is then hauled to their headquarters.

When the bikies realised they could use the gym as a base for their nefarious activities, they sent in “bookkeeper” Genevieve to carry out some money laundering in the back room. Originally, the bikies had asked Tane to refund the money with interest. Tane had intimated to Rose that Tex might not be what he seemed to be, and the detective soon came to learn the truth. 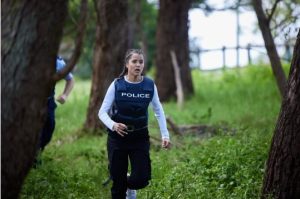 Cash, meantime, has been having trouble since Jasmine (Sam Frost) abruptly left the Bay to assist Robbo’s (Jake Ryan) mother, who had suffered a heart attack.

He prepared a spectacular night for her return to the Bay with champagne and an engagement ring as his loneliness increased over time.

Cash is devastated when Jasmine decides not to return to the Bay and goes to the police sting Rose is running so she may capture Tex and the bikers.

When they overhear the bikies discussing Tex’s “police girlfriend” and how she was used, Rose is soon left feeling humiliated.

Despite this, Cash claims to understand how she feels because the person he was planning to propose to recently dumped him.

Is this bond between the two a favourable sign for the future when both Cash and Rose are hurt and exposed?

Home and Away  to Air Mental Health Stories for Martha Stewart...