EXCLUSIVE: Rose grapples with her guilt over Cash’s shooting on Home And Away as Dean lashes out at Remi

Following the fatal gunfight, a number of futures are in jeopardy, and Rose is taking full responsibility for everything.
In Home And Away, Cash (Nicholas Cartwright), who was shot during the police raid at the bikie headquarters, is still unconscious. Kirsty Marillier’s character Rose feels it’s her fault for putting him in danger.
The policewoman ignored the issues at hand because she was so determined to get her ex-boyfriend Tex (Lucas Linehan), especially after he misled her about his identity.
“There is tension throughout the hospital. Cash really is a life or death situation “explains Nicholas, 33, to TV WEEK. “Everyone simply hopes he makes it out alive.” 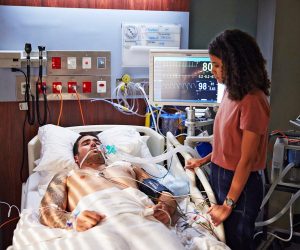 Even so, the drama continues as the trial gets underway. When Rose gets up to testify against Tex, she is bombarded with demeaning claims about her friendship with the defendant.
Both of them experience contrasting memories when they recount their affair.
Lucas, 32, says, “Tex definitely has feelings for Rose, but I don’t think he came to Summer Bay to fall for the town cop.”
The only issue is that Tex’s gang, The Death Adders, comes first for him, forcing him to make difficult decisions when the going gets tough.

Tane (Ethan Browne) is hoping to be let go after helping the police bring down gang leader Marty (Ben Wood) and his group.
He and Rose must attempt to persuade the bikies that he had nothing to do with the raid on their headquarters in order to keep him safe. The following morning, however, news reports about their connection to the bikies turn Summer Bay against them.
Rose fights to control her emotions as the strain increases. She concludes that perhaps Summer Bay isn’t home anymore after having a heart-to-heart with her brother Xander (Luke Van Os). 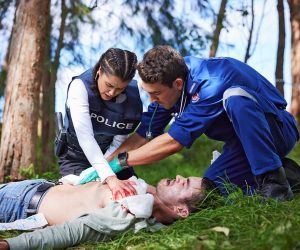 Dean yells at Remi in a jealous rage.
Bob took the van with him when he left the band, leaving Lyrik in desperate need of wheels.
Ziggy, a mechanic, volunteered to go with Remi to check out a replacement, but their well-intentioned examination goes horribly wrong when they are stuck in a shed in a secluded location.
This week, Ziggy (Sophie Dillman) and Remi (Adam Rowland) are forced to spend the night in a dingy shed after the owner of the van tricked them and stole their automobile.

As night sets, neither of them have their phones, and Dean (Patrick O’Connor) is quite anxious.
While she is with the musician, Dean, who thinks Remi is trying to steal Ziggy from him, sets to work trying to find her.
Dean discovers what he’s seeking for as morning begins and rushes to aid Ziggy.
Ziggy rushes to embrace her saviour when the shed doors open but is horrified to see her lover hit Remi in the face. This can’t go well, can it?

Bec Hewitt goes makeup free as she bundles up in a...